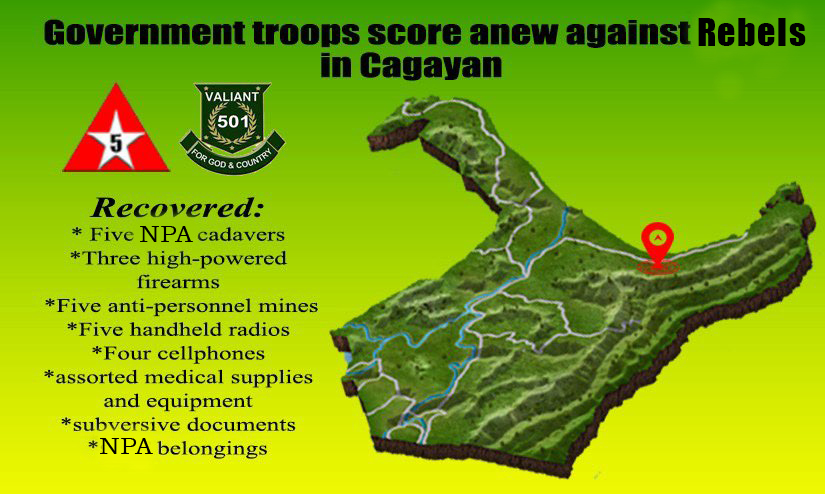 Responding to the information on NPA hideouts in the said area, the operating troops of the Joint Task Force Tala encountered more or less 40 rebels belonging to the Komiteng Probinsiya Cagayan, Komiteng Rehiyon – Cagayan Valley (KR-CV). Intermittent firefight ensued which lasted for about two hours. Close air and fire supports were immediately delivered to support the ground troops from enemy counter fires and anti-personnel mines . After the firefight, the rebels scampered to different directions leaving their dead comrades and their firearms behind.

The accurate information provided by the locals and the timely, precise and well-coordinated actions of the ground troops and the Philippine Air Force led to this decisive engagement against the terrorist NPAs without any casualties on the government forces and the civilians.

The recovered APMs clearly shows the rebels’ continuous violation and complete disregard of the International Humanitarian Law particularly the Ottawa Treaty which prohibits the production and use of anti-personnel mines.

Early on, the 5ID has been calling the remaining rebel’s to surrender and rebuild their future through the livelihood programs offered by the different government agencies and other benefits from ECLIP. Many of their mass supporters have also withdrawn their support from the Communist Terrorist Groups (CTGs) and are now cooperating with the government.

Prior to the encounter, there were alarming reports of extortion activities perpetrated by the NPAs in the area.

MGen Laurence E Mina, Commander of 5th Infantry “STAR” Division said that 5id remains steadfast in working with the people and the Local Government Units in ensuring peace and development in its Area of Responsibility. “I am once again calling the remaining communist rebels to lay down their arms and return to the folds of the law. The government is always ready to help you live a new life,” he concluded.(5ID press release)